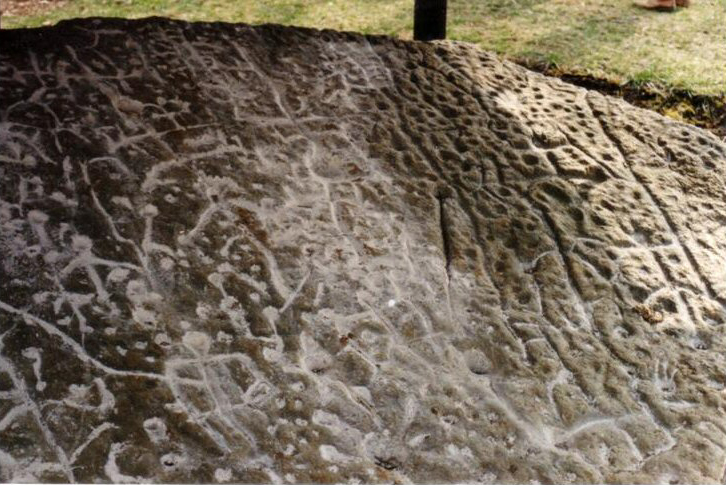 Group Contact,  Richard Crutchfield sends this update.  Activities and Plans, 2016-2017:    Of the vast number of topics suggested by the title “Ancient Wisdom”, we have chosen so far to explore two relatively well known mysterious phenomena in WNC, both possibly for the first time from a strictly dowsing perspective:  an ancient petroglyph near Cullowhee, NC, and the famous Brown Mtn. Lights reportedly seen on occasion from Wiseman’s View overlooking Linville Gorge.

The first expedition (of 3 June) generated a great deal of enthusiasm and consisted of some 13 members and guests.  Guided only by a Cherokee myth, popular speculation and readings of a WNC psychic named Page Bryant (“The Spiritual Awakening of the Great Smoky Mountains”), we nevertheless attempted to determine if possible (via dowsing of energy fields, etc.) the authors, the approximate age and the ultimate purpose or message of strange glyphs carved on a slab of soapstone known as “Judaculla Rock”. The results were tentative and varied at best, but the experience convinced many of the vast possibilities dowsing can offer in researching the ancient past, especially of this region.

The second expedition, undertaken on an unusually clear night by four of the group on 29 October, was to investigate (perhaps for the first time through dowsing) the essence, strange behavior – and perhaps the origin and whatever purpose might be behind- the mysterious Brown Mountain Lights.  A chancy project because the lights have been seen and photographed only intermittently over many years.  To the amazement of the team, however, the lights as described by previous witnesses,  appeared – not once but over several minutes. A necessary follow up attempt is now under consideration. Other group members have noted that similar lights have been commonly observed for years near the SW Texas town of Marfa (called the “Marfa Lights”) and that light phenomena in the crop circles world wide have been even stranger.

A third area of interest for the group early on was a group of strangely organic looking rock formations in the Piedmont area south of Charlotte and in the Uwharrie Mts. east of Ashborrow, NC: Big Rock Nature Preserve (“Indian Rocks”) and Bridges Mt. Nature Preserve.  Both trips present a special challenge for energy dowsing re. ancient origin and purpose but had to be canceled due to extreme summer heat and will be rescheduled  for late Fall or Winter.  Also to be studied will be a possible energetic and historical relationship between these formations and a series of ancient and mysterious stone walls in the mountains around Asheville.